The life cycle of a mayfly begins when the eggs laid on the water by a female mayfly; an activity that most commonly takes place in the evening, and to a lesser extent, morning hours. Small mayfly nymphs hatch out of these eggs, spending a long portion of their lives about one year under water as a nymph until the end of this cycle approaches. This is when the nymphs hatch an achieve per-adult status, which can happen in two different ways: One method is for the mayfly to swim up and attach itself to the surface film, where the nymph will shed its shuck or case and emerge as a winged dun. In addition some species of mayflies emerge on stream bottom. Upon completing this they rise to the surface as full-blown winged dun’s.
The wings of a mayfly dun are gray in color during this phase of life hence the name. After emerging is complete the newly hatched bug will float on the surface of the stream until the wings are dry and will take flight to stream-side brush or trees to undergo its final molt. After one or two days, the mayfly will go into its final transformation into the adult mayfly. Shedding its skin for what is often an entirely new body color, and wings that are now clear.
When molting is done, the mayflies take flight into the air to mate in midair. After mating, the male mayflies will die, spinning down towards the water laying dead in the surface film. The females will return to the water to lay eggs and die themselves.
Posted by Jim Guida at 6:08 PM No comments: 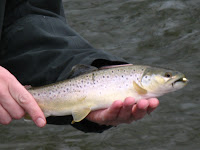 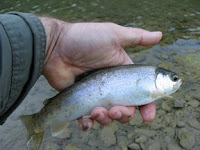 The rains have come back and the creeks are on the rise again, depending on which creeks you go on. The bigger ones will go up and dirty quickly, while the smaller creeks should be fine. We are getting brown stone flies and some B.W.O. action when the temps warm up. The Hendrickson’s should be starting up after the middle of the month.
Posted by Jim Guida at 5:48 AM No comments:

I went out late this morning to try and stay away from the crowds but that didn’t work. The weather was very good for this time of the year, warm and light winds. The water was a little higher than I would like it but you have to fish when you can go out and today was my time, getting on the water late, while changing in the parking lot I ran into Jason one of my old customers, he asked if he could go fishing with me and I gladly accepted his company. We worked our way upstream to my favorite section and started to swing buggers, with no results I switched to a new sculpin pattern that I have come up with and while swinging it in the classic down and across approach, I felt a sudden jolt of a nice fish and I was hooked up!!!!!. After a very good fight I landed the two year brown trout, quickly releasing him so he can give another angler the same pleasure I had.
Posted by Jim Guida at 5:45 PM No comments:

The streams are dropping and should be fishable this week and with warmer weather in the forecast, we might see some good fishing. I will be fishing this sunday afternoon and will have a full report later that day.
Posted by Jim Guida at 7:32 PM No comments:

Trout season has opened as of today here in N.Y. and the conditions are about as lousy as they can get high water and lots of wind. The fishing conditions should get better for the weekend barring any sudden down pour. We went out Sunday and the fishing was very good, using the tried and true wooly buggers and hares ears nymph we caught several nice two year old browns.
Posted by Jim Guida at 11:27 AM No comments: