Rationale: Extensive public input indicates that many anglers would prefer to use bait, particularly in the vicinity of the Village of Franklinville. This change would enhance angling opportunities by allowing beginner and young anglers to use the section of stream located in the village.

Email a comments to

We all need to fight to keep all Catch & Release sections everywhere in this country. The lazy environmental rapists need to learn to preserve the resource not destroy it for their own greed. C & R sections should be protected so our children and beginning fisherman can enjoy success with out  driving miles and miles because the streams are empty from over harvesting, plus the sight of the slobs leaving live bait containers and garbage all over the banks is a huge put off and we all get a bad name.

Let trout fishing be a year round activity not just a one or two month beating of  our water ways.
Posted by Jim Guida at 9:24 AM No comments: 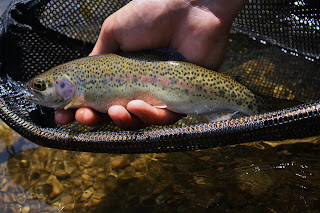 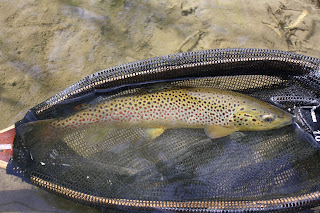 We hit the upper catt for some inland action, and what a great day it turned out to be. The water was perfect and the fish ready to take our offerings. I started off with the spring creek special and got a few, but the nymph's were the ticket. We used hares ears and prince nymphs mostly, the biggest fish of the day came on my peacock and biot nymph which imitates a march brown. We got a mixed bag of brown's and rainbow's throughout the day.
Posted by Jim Guida at 8:55 PM No comments:

We have to find the person who is doing the rain dance and cut off their legs!!!!!!! The rains have come and look like they are going to be with us for the better part of a week, so i would be very careful on where you want to fish, as most streams are high and looks like they will stay that way for the upcoming week.
Posted by Jim Guida at 3:50 PM 2 comments:

For a caddisfly, the first stage of life is spent as larvae; depending on the species of caddis, this larvae stage is spent in a case, a fine (web like) net , or as free-crawling larvae on the bottom of the river.
When they are ready to emerge, the larvae pupate and swim to the surface (using their legs, body, and wings), where they hatch into an adult. An important note on emerging pupae, is that they often hold in the surface film for extended periods of time--a highly vulnerable situation.
From here, the newly hatched caddisfly will quickly fly away and mate. Unlike the mayfly, an adult caddisfly has a fully developed mouth, allowing it to feed thus affording it a long life--days, weeks, or even months for some caddisfly species.
After mating, the females return to the water to lay their eggs, which is accomplished in different ways by individual species of caddis. Some females lay their eggs on the surface, while others actually re-enter the stream and swim to the bottom, where they deposit their eggs.
If you are not familiar with their appearance, caddisflies have wings that fold over their body similar to the shape of a tent. Unlike the graceful flight of a mayfly, caddis appear nomadic while in flight, diving and weaving erratically in the air. If none of this helps you to recognize a caddisfly, remember, they bear a striking resemblance to a moth. An important note to recognizing caddisflies is that specific identification is often not necessary; instead, attempt to imitate the basic silhouette and size of the bug.
A caddis emergence can confuse anglers not familiar with its hatching characteristics. During a caddis hatch, it is common to NOT witness insects floating on the surface, yet see fish feeding. Caddisflies emerge rapidly, often without detection by the fisherman. This speedy emergence also causes the fish to display a characteristic rise when feeding on emerging caddis pupae. When emerging caddis are present, fish will rise splashily and aggressively, often leaping completely out of the water after the swiftly emerging pupae. Although this behavior is also, in part, due to the speed of the current; basically, fish have to move and feed more aggressively in a fast current as opposed to a slower one. If all else fails, what is the best way to recognize if you are in the presence of a caddis hatch? The best indication is when you see feeding activity by the fish without any bugs appearing to be present.

Fishing an adult pattern is probably the single biggest mistake that people make when in the company of a caddis emergence. At this time, the fish are interested in the emerging pupae, not adults, as the mature bugs are not yet present. Iris, X-Caddis, and LaFontaine’s Sparkle Pupae, in corresponding sizes and colors, are fly patterns that have proved very successful for fishing a caddis emergence. Adult patterns become highly effective when adult caddis are present, which is most prominent during egg-laying activity.

As with all sources of food, trout are only interested in the mature caddisflies when they are active on or in the water, which, for adult caddis is during egg-laying. At this time, the Elk Hair Caddis or other adult patterns, in a corresponding size and color, become highly effective as they closely match the characteristics of an adult caddisfly. 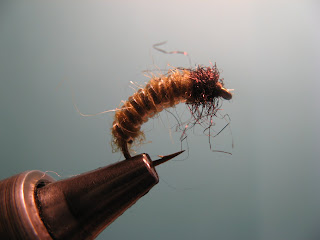 There is no disputing the fact that patterns such as the Elk Hair Caddis work at times when there is little or no egg-laying activity. Caddis enjoy a relatively long life-span and are prolific in many streams, imprinting themselves as a prominent food source in the fish’s brain. With this in mind, one can theorize that fish will readily consume these imitations based purely on recognition. This, in part, is the theory behind attractor flies and blind fishing; basically, during those periods when caddis activity is heavy (summer months), fishing a caddis pattern is wise, even when emergence or egg-laying is not currently present; conversely, fishing an adult caddis imitation when there has been little or no activity 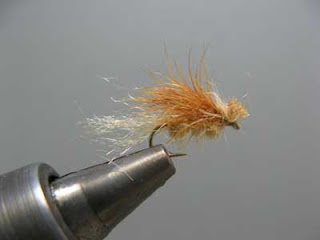 (winter for example) is less than prudent.
Posted by Jim Guida at 7:45 AM No comments: 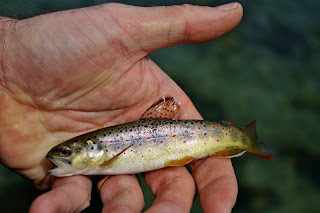 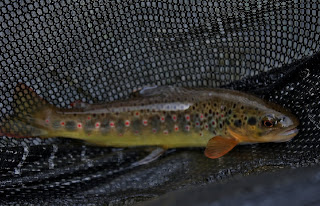 Well i finally got out to fish with Luke and Andy, for our first inland trip to Spring Creek. The weather was perfect and the fish hungry. I caught a bunch on scuds size 16-18, blood worms and black midge's size 22-24. After lunch we headed over to Oatka to throw meat in the high water, it was a good choice as we got into trout, pike, and a large mouth bass. The bass was the first one any of us seen caught here a monster 3lbs and over 20" 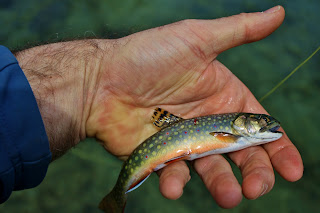 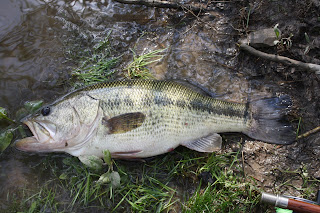 Well the reports are the same, rain and rising water for most of the area. You will have to pick the water wisely or you will drive all over. The smallest should be fine to fish with the biggest out of the question for now.
Posted by Jim Guida at 9:44 AM No comments: